“The purpose of Mannaminne is to show how ‘everything’ is connected. Culture depends on history, technology and influences from near and far. Man is driven by curiosity, restlessness and the ability to feel for his neighbor through the short life.”– Anders Åberg

Realized by Anders Åberg (1945-2018), the Stockholm artist who did not settle for flat painting but let the wooden houses and figures rise out of paintings and decorative walls. He also came to forever change the design of Swedish museums with his socially conscious, poetic depictions of a disappearing countryside, portraits of desolate houses and metropolitan slums and depictions of human conditions in different places in the world.

This is how Leif Kåvestad writes about Anders:

“Anders Åberg began his career as a painter and became known by the general public for his decorations together with Karl Olov Björk in Solna Metro Station, which was inaugurated in 1975.

The station is characterized by the color scheme of the walls in blood red and deep green with painted images that were improvised. It became a document by Sweden in the 1970s that dealt with environmental toxins, depopulation from sparsely populated areas, closure of shops mixed with peepholes and pictures of accordions, joggers, moose and excavators.

It was a time of change and contrasts and Anders was hired for a number of exhibitions under the auspices of Riksutställningar.

At this time he switched from painting to carving people, animals, house portraits and boats, which is a recurring motif. In the symbol world, the house is interpreted as a symbol of one’s own self and world center, while the ship is a symbol of the great mother in her protective aspect.

From house portraits and model-sized houses, the step was not far to carpentry buildings large enough to accommodate both visions and the trams that are on Mannaminne.

Over the years, there have been 131 decorations and public works of art for institutions, municipalities and companies both in our elongated country and abroad.

In addition, Anders Åberg has done the scenography for André’s aviation, the Apple War and Ronja Rövardotter. It is all these public assignments that have largely financed Mannaminne.

Anders Åberg died on 23 January 2018. Mannaminne, located in Nordingrå a few miles north of Härnösand, is Anders Åberg’s creation and heritage to the world. A unique building that has grown from an idea to a cultural center in the World Heritage High Coast. “ 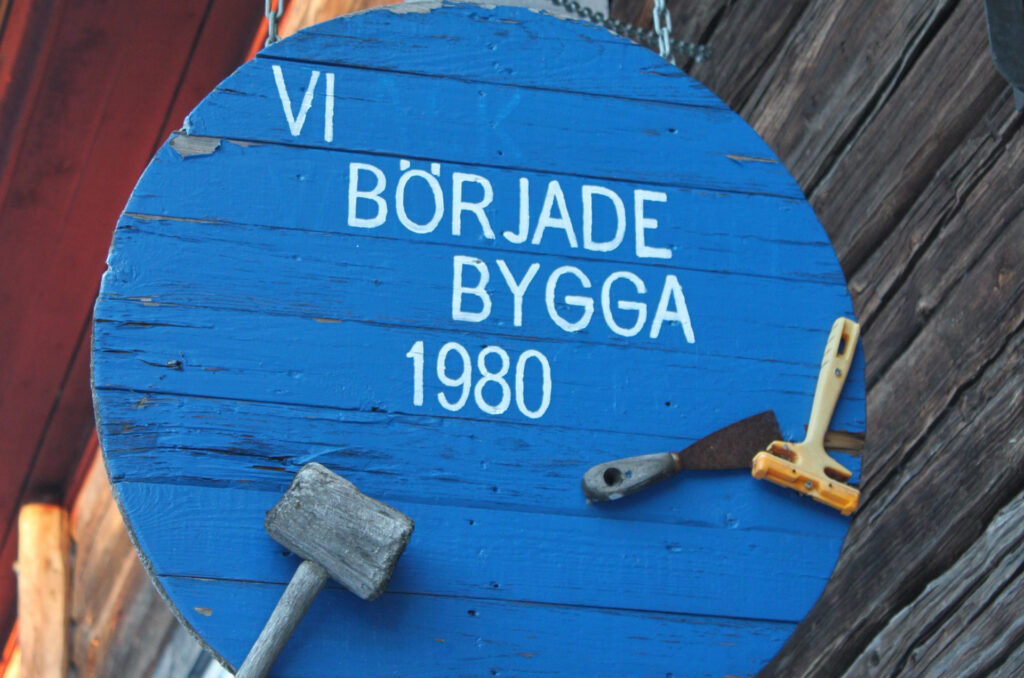 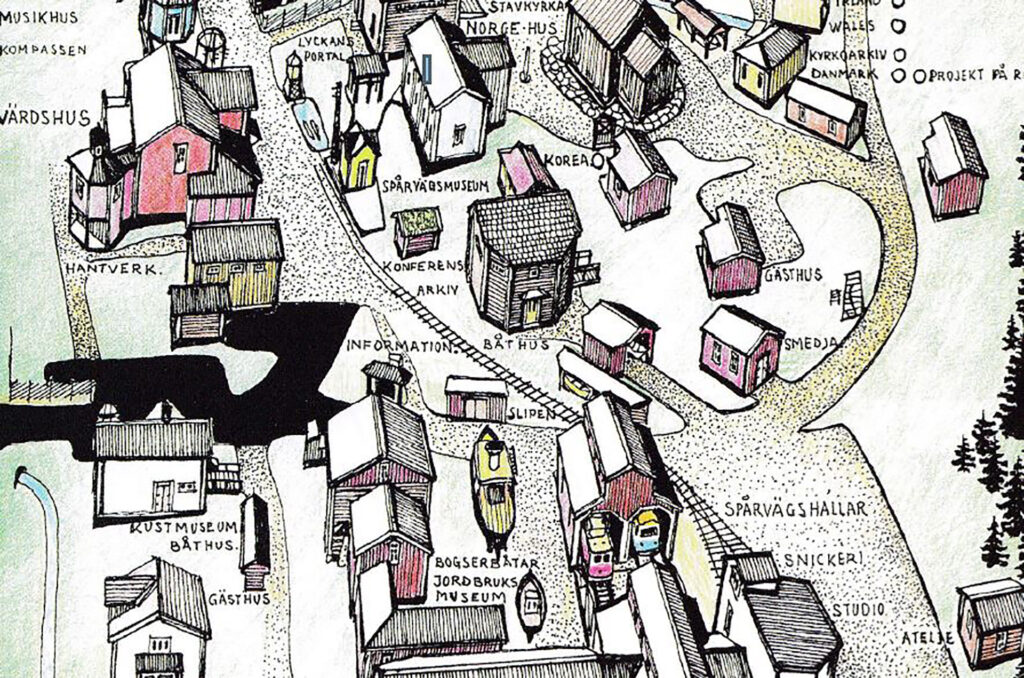 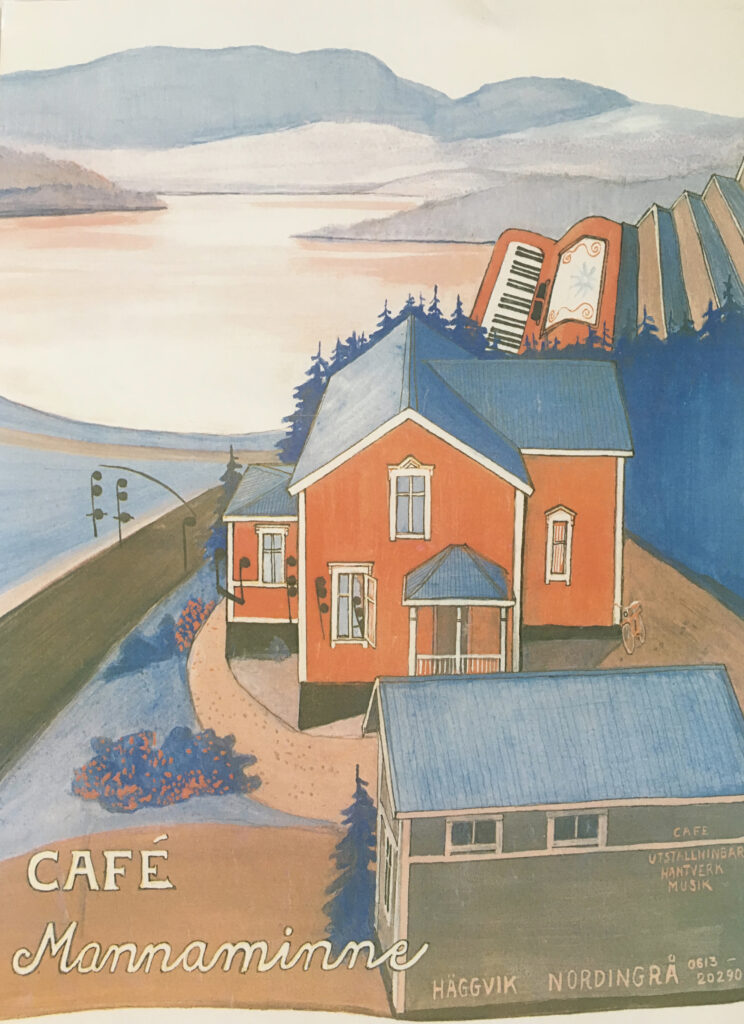 Café Mannaminne was started in 1980 by Barbro and Anders Åberg together with artist friends Lisa Carlsson and Dag Wallin. The idea was a café with and for art, culture and music, far from the big city, a way to take the world to Nordingrå. In collaboration with many artists and carpenters, Mannaminne became a growing all-art work with over 50 houses from near and far, in different styles and traditions. The Globe House, the China Pavilion, the Estonian House, the Accordion House, the Hungarian Farmhouse, the Art Museum, the Round Lodge, the Stave Church, the Norway House, the House of Technology, the Agricultural Museum, the Minority Chapel, the Coastal Museum and a hotel built as a Finnish mansion. Some houses moved here from neighboring parishes or distant lands, some built on site and all filled with decorations, cultural history and art exhibitions.

Together with collected objects such as boats, trams, airplanes, vehicles and agricultural implements and even a mammoth, this constitutes a completely unique collection of art and history, in an environment that can provide both stimulus and inspiration, or provide space for reflection and peace. .

Anders and Barbro Åberg ran the entire Mannaminne together until 2012, when Mannaminne was transferred to the Mannaminne Foundation.